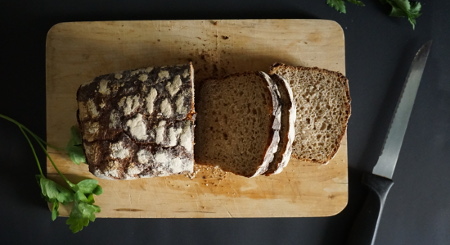 Damned, cursed, the evil in one word: Gluten. Before even knowing what it is and where it comes from everyone understood pretty fast, you’re better off without it. (Could you imagine) the food industry got it even faster! All of a sudden gluten-free products were all over the place and to find in the average pantry. Also foods naturally free of gluten suddenly couldn’t hold themselves back from marketing their (new) benefit. Passing the dairy- and lactose-free segment, gluten-free has in the recent years rapidly increased its share on the market and yet not exhausted its full growth potential. Is it really healthier than the “conventional” choice?

Gluten is a protein contained in wheat, barley and rye. In fact, its main purpose in the grain is to nourish the plant during the seed germination – it’s needed to make the plant grow (up to that point a rather charitable guy, no?) Furthermore, and maybe more interesting to us: It’s sexy! Gluten gives bakery products, pizza and pasta their elastic and chewy texture… mhhhhmm… an entire food culture living on gluten! However, coming from what must be heaven to some people at least (yes, pastry does appear in my dreams) now back to what was indicated before: There is a dark side in the life cycle of gluten: when it enters the gut.

Gluten is the only dietary protein that is indigestible for our stomachs. You might think: Fair enough, there are other food components (like fibre) that we cannot digest… however, being a protein it is more likely to interfere with the autoimmune system causing more or less severe reactions. With a prevalence of 1-2 % a rather small proportion of the European population suffer from celiac disease – an inherited autoimmune disease where gluten becomes life-threatening by strongly damaging the intestinal wall. People affected often show stomach pain, diarrhoea, anemia and weight loss because the inflamed gut cannot absorb nutrients well. Still incurable there is only one treatment: A life-long strict gluten-free diet.

Apart from celiac disease more and more people claim to have stomach ache and digestion problems due to not tolerating gluten. However, while celiac disease can be diagnosed by anti-bodies or biopsy tests there are no reliable tests for other related intolerances. Moreover, it became clear that the intestinal discomfort some people develop when they eat wheat and other grains does not necessarily need be due to gluten exclusively and therefore it should be rather referred to as wheat intolerance. In any case, the only way to know if you might be sensitive to gluten or wheat in general is to undergo an elimination diet (means excluding the respective from your diet over a given time frame) – bearing in mind that a wide range of processed foods and drinks such as instant food (and, sorry guys, beer too!) may contain gluten as well.

Even though the gluten-free hype has already shown to be able to cause a placebo effect in part of the healthy population – some people argue they feel healthier as they believe they do good by avoiding gluten. However, there is no scientific evidence on beneficial health outcomes resulting from a gluten-free diet in the broad (“healthy”) population. On the contrary, merely celiac disease patients and people with gluten sensitivity are recommended to follow a strictly gluten-free diet. For all others there is to consider:

As for everything else, the dose makes the poison and gluten doesn’t come on it’s own but in foods that contain much more than this one substance. Even researchers want to often ignore the fact (it would make their life a lot easier indeed) that finding a significant cause-effect-relationship between a single ingredient and a health outcome is a long way to go and can be biased by many factors. I see it as important to listen to your body. Eat consciously and you’ll be the one who knows what works best for you.

That moment your skin sees sun for the first time after 6 months of cold & darkness... is a very happy moment. ☀️🙌👙 #sun #beach #beachtime #cadiz #sevilla #bikini #playa #summer #vacation #spain #tan #happy #curves #bodypositive #skincare #fitness #girl #españa #swimming #spring #moments
Ending 2018 as it started. With a huge serving of self-love. One of my most favourite habits I adopted this year: Saturday early morning me-time at the gym, followed by one of the best vegan lunch buffets in town.
When chickpeas are life... hope you all are still having fun with your Christmas food preparations 🤗
I cannot get enough of red cabbage and kale 😍 It really makes a perfect base for a salad... or a "burger bowl" 🥗 my low carb friends know what I'm talking about 😅
So that's what you will find on my lunch plate these days. Believe me, this dish could look a lot more colourful if it wasn't for the sake of tomato sauce 😅 Fried with leafy greens, sprouts, and beans or the occasional meat replacement these meals are a great time-saver!
Trying to catch the whisper of the wind. #throwback to our getaway to Gotland @andrea.isabelle.s 🤗
Yes, I've put myself on a diet for this month... and honestly, meals like this is making it so much fun! My lunch contained just 400 calories and was filling both my stomach and heart 💚 Here we've got spinach, baked parsnip & betroot, grated carrots, alfa, cress, and vegan bacon.
What is it that prevents you from taking that first or the next step in your fitness journey? It doesn't matter where you stand in relation to what is set as your "goal", isn't it the learning process along the way there that makes life so exciting? 🏋️‍♀️ See you on my blog! Link in bio. 😊
This Jasmine rice goes straight into your muscle 😏 and that's why there is no greater feeling than that meal after a sweaty workout, is there? 😋 👉 Don't forget to swipe for macros.
Volume. Volume. Volume. A little less carbs for me today but still enough to feed the hungry girl. 😄 👉 Swipe for information on macronutrients.
That was 2 vegan months for my little sister. I loved cooking food for you @andrea.isabelle.s 💕 hope to see you soon back in Stockholm! 😘
This month I worked out 6 days/week and I feel more energetic than ever before. Is it because I "turned vegan" or decided to give those daily full-body workouts a try? 🤷‍♀️ Nutrition-wise I'm on a slight caloric surplus and can see some progress in strength and mass. Still no plan though on where my fitness journey is taking me... but I feel that trusting my intuition has been a good guide so far.
Imagine yourself in the following situation: Workout is finished and you feel your craving for a sandwich is as huge as it is for a curry stir-fry. 🤷‍♀️
Today's lunch was yesterday's dinner. Coincidence? 🤔😅 However, root veggies are one of my favorite type of carbs as they are so nutrient-dense while being relatively low in energy. It has been a while since I last prepared a soup (perhaps I'm one of those people who keep them for the cold days...) but it was worth the waiting! With this being said... Let the soup season begin! 👸☝️ Introducing "The Roots": celery, potatoes and carrots. Cooked in vegetable broth, seasoned with garlic & nutmeg. Add some plant-based cream and your favorite protein - I felt lentils did a great match. 🌟
Last weekend it felt like autumn officially has arrived 🧤🧥 Does this mean there won't be any more spontaneous lake swims? 🤔 Hmmm... not really 😁✌
When friends need relationship advice... and all I had to offer was this pizza 😅😅 What can I say. Happiness goes through your stomach. 🤗
Boom! 4-ingredient-lunch is served. Yellow pepper, lentils, potatoes and kale. Add some hummus, avocado or cashews on top if you wish. I'm looking forward to some dark chocolate for dessert... for the healthy fats ya know! 😏✌
Always remember that your nature is happiness 🙂
How much of the nutrition is left?
Fried polenta makes a simple, healthy base for a quick lunch. It contains complex carbs, fibre and even some protein which I chose to complement with tofu today... did I mention tomatoes and spinach?! 🤗

Get in touch & ask questions!

stefanie.schulz@outlook.com:
For nutrition related questions, suggestions for my next post or getting in touch for business - don't hesitate to drop me a line!